Audrey II, pet named Twoey, is the main antagonist in every version of Little Shop Of Horrors. The plant requires human blood to survive, and in the musical, the plant's origin is from outer space, while in the 1960 Movie, it was called Audrey Jr. and was a cross between a Venus fly-trap and a Butterwort.

Audrey II was bought by Seymour from an old Chinese man by the name of Chang, a florist that sold other exotic plants, for just "a dolla' ninety-five!" At first, Seymour just thought of Audrey II as a sort of Venus Flytrap, yet all the different types of food and care he gave it didn't work and caused it to grow weaker. Eventually, Audrey II grew larger into a hideous beast that gained the ability to talk and soon began to beg Seymour for more food, upgrading from blood to human meat as well. Audrey II played with Seymour's emotions to convince Seymour to kill Orin Scrivello, a sadistic evil dentist who abuses Audrey, Seymour's love interest, and also took advantage of Seymour nearly getting arrested to kill Mr. Mushnik, his boss (who later adopts him before dying) for food.

Audrey II (now enormous) called Audrey, Seymour's lifelong love interest on the payphone and convinced her to come over to the shop only to eat her. Seymour did not save Audrey in time and unwillingly, yet on her dying wishes, fed her to the blood hungry plant. Audrey II then consumed Seymour after destroying the shop, and shortly after, its leaves were sold all across America which resulted in similar situations that happened to Seymour (tricking innocent people into feeding their plants people) and eventually, the plants (after reaching a massive size) attacked and are seen destroying cities and eating people whole all over the world. The ending shows the United States Army fighting the plants and the Statue of Liberty being ascended by the Audrey II plants. It is heavily implied that the Audrey II's managed to eat everyone in the world, including the audience watching the film.

"You ain't in Kansas, neither!" The Following Information is non-Canon. The theatrical ending of the 1986 film is not canon to the Little Shop of Horrors musical.

However, in the theatrical ending, Seymour saves Audrey in time before he challenges the monstrous plant in a final showdown, and barely escapes death by electrocuting it. With Audrey II and its newly blossomed buds (who work as back-up singers during Audrey II's song in the show-down, Mean Green Mother From Outer Space) being fried alive from the electrical wires, the plant exclaimed a surprised "Oh shit!" before exploding into green-blue atoms that are presumed to be seeds or re-generating plant spores. This is presumed on account of the ending of the movie where hidden in the happy, little garden in the front lawn of Seymour and Audrey's new home, is a new, baby-like version of Audrey II that gives a wicked, "I'll be back" smile to the audience before the credits roll.

According to a behind the scenes interview, Audrey II is from a planet of carnivorous plants who are sent to different planets to destroy them in the way Audrey II intended. How the plant came to earth is not completely understood, but it is known that it came to the planet through an eclipse of the sun and an unworldly strike of green "lightning". It could be speculated that the eclipse was caused by Audrey II's spacecraft of some kind. The film has never explained any of the alien race which Audrey II is a species of, yet Seymour thought of the plant as a type of Venus Flytrap. What is known is that at least two of the alien plants were on Earth in the theatrical ending, where Audrey II and a smaller alien plant in Seymour and Audrey's garden lawn at the end of the movie. In the original ending, it was said thousands of them were sold, but it is unknown how many survived into adulthood. In infancy, Audrey II did not have the ability to speak (or, at least, was so malnourished that it did not have the strength) but had the ability to move around its' mouth in and slightly move its' body. It also had the ability to make sucking noises, as a way to tell Seymour it was thirsty. However, Audrey II's offspring or buds were able to talk and sing as back-up singers during Mean Green mother From Outer Space, adding "Aaaahh"s, even though they were "newborns" during their singular scene, suggesting that they were simply extensions of Audrey II rather than independent beings.

Audrey II has its own charming, funky, and almost sweet-talking power of persuasion, which easily hides its sinister intentions. In short, this plant, the only one of its kind on Earth, is an evil genius that could easily take advantage of Seymour's disposition.

Audrey II goes through eight different forms in the 1986 film:

The original script offers a character description of Audrey II as follows:

"An anthropomorphic cross between a Venus flytrap and an avocado. It has a huge, nasty-looking pod which gains a shark-like aspect when open and snapping at food. The creature is played by a series of four increasing large puppets, manipulated by one Puppeteer. (Who also plays Wino #1 in the first scene.) The first time we see The Plant, it is less than one foot tall. The last time we see it, it fills the entire stage."[1]

The original script also offers a description of Audrey II's voice, as follows:

"Provided by an actor on an offstage microphone. It is important that this actor has clear visual access to the puppets onstage so that he can provide accurate lip-synch. The sound is a cross between Otis Redding, Barry White, and Wolfman Jack. Think of The Voice as that of a street-smart, funky, conniving villain-- Rhythm and Blues' answer to Richard the Third."[2]

While the voice used for Audrey II is male in most portrayals, there is much debate about the actual gender of the plant. It is strongly suggested that Audrey II has no sort of human gender, as most plant species (including Venus Fly Traps) do. One would also do well to remember that Audrey II is an alien, and if it does have a gender it still may not pertain to human sex concepts.

Most fans simply assume Audrey II to be male since it is always voiced by a male actor.

In the cut song "Bad", which was the predecessor to "Mean Green Mother", Audrey II uses masculine pronouns: "Just one encounter and she called me 'Mr. Audrey, sir'", though this may not be fully accepted as cut songs are treated as non-canon material.

Some fans claim the plant to be female, drawing support from the final scene, in which Twoey not only refers to itself as a "Mean Green Mother", but sprouts off infant plant pods, an action which is easily interpreted as the equivalent of giving birth.

It is much more likely it merely chose to use the term "Mean Green Mother from Outer Space" because at times the word "mother" is often just a derivation from the common swear phrase, "Mother F***er".

Audrey II is also unlikely to have actually given birth, as its offspring were merely other buds off the same plant, and were probably able to talk because they were in fact a part of Audrey II's consciousness, representing an extension of Audrey II, and not true "children".

Many plants possess both male and female parts, and it is shown in the film more plants are able to be created without Audrey II coming into contact with another of its species.

The children may simply have been created by splitting, a common gardening technique in which a plant is split and become separate plants. There is one plant confirmed to have been created through this process in the film.

It took elaborate puppetry in order to make Audrey II come to life. Besides the electric sparks in the final scene, not a lot of CG was shown in the film. To the viewer, it appears that Audrey moves in real-time along with Seymour, or whoever else it's singing with/talking to. But since it can only move at a certain speed, it would be filmed singing/talking at 16 frames per second. Rick Moranis and all of the other actors would have to sing in slow motion, which (in editing) would be sped up to appear that they're singing in unison at a normal speed.

Cameos In Other Media

Audrey II is also referenced in a large variety of media: 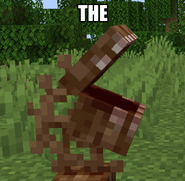 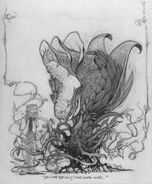 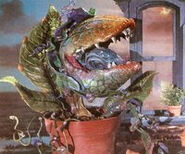