Due to multiple Little Shop of Horrors adaptions, and multiple other factors, there are multiple endings to the story. There is still debate today over which ending should have been kept in the 1986 adaption, and thus all endings are listed here for reference.

In the original 1960's film, Seymour is devoured after the other victims are revealed to pop out as Audrey Jr..'s flower blooms, with him crying that he didn't mean it.

In the Stage Ending, Audrey and Seymour are eaten, and the song "Don't Feed The Plants" warns the audience not to be tempted by the plants, lest the same things happen to them. Most versions of the stage ending also include the deceased characters coming back from the dead in the form of Audrey II's blossoms to sing along and warn the audience.

The original ending stayed closer to the stage musical and the original 60's version by having Audrey II win, and eat Audrey and Seymour, and then proceed to take over the world. 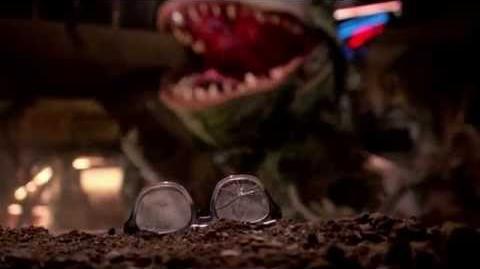 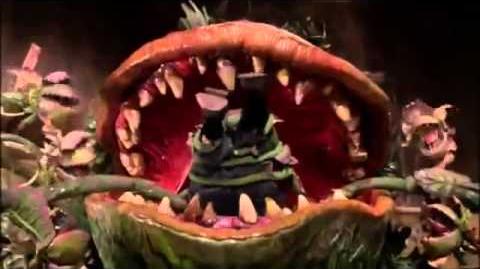 "You ain't in Kansas, neither!"

The Following Information is non-Canon. The theatrical ending of the 1986 film is not canon to the Little Shop of Horrors musical.

After the test audience complained about the original ending, it was replaced by the theatrical ending, in which Audrey and Seymour defeat Audrey II and live happily ever after, BUT WAIT A SECOND!