Seymour Krelborn is the main character all of the versions of Little Shop of Horrors. He was the owner of Audrey II. Seymour has had a long time crush on Audrey, wanting to marry her ever since she came to work. But he could never voice his opinions due to his shyness and the fact that she had a boyfriend.

At Mushnik's Flower Shop, Seymour is a floor sweeper and puts the flower pots in range. He doesn't get paid because of how clumsy he is, and because he is constantly being treated horribly by Mr. Mushnik. The movie starts off with him already owning Audrey II. He brought the plant from a Chinese flower shopowner, who gives him many exotic and strange plants. Seymour did not know but during some sort of eclipse, the plant is striked giving itself life in a form that develops into a human like creature that is carnivorous (eats meat). But he had no idea how to take care of it, as he sings in "Grow For Me". However, when accidentally cutting himself, he noticed the plants immediate response to the blood. He reluctantly squeezes some blood into the plant's mouth which results in Audrey II growing larger. Because of his plant, the flower shop gains more business and Mr. Mushnik treats Seymour a tad nicer.

Soon, after meeting the sadistic Orin Scrivello, D.D.S, Seymour sees the cruel dentist abuse Audrey for pathetic reasons (falling off of the motorcycle, not calling him by his full professional title). At first, he doesn't act on it but is persuaded by Audrey II to kill him. The next day, he goes to his office, pretending that he wants a mere checkup. Orin, who gets off on the pain he inflicts, decides to make the situation more enjoyable by wearing a mask that emits nitrous oxide. Hysterical and deluded, Orin accidentally breaks the valve on his mask, releasing even more N2O into his lungs. Seymour takes advantage of the situation by confronting him with a gun, the entire event Orin isn't even taking seriously. Orin soon collapses in laughter, and in his final moments Seymour reminds him of his abuses towards Audrey. Seymour conceals his body in a bag, drags him back to the shop, and forces himself to chop up the body to feed to the ever-growing Audrey II. Unfortunately for Seymour, Mr. Mushnik was making an early trip to his shop that morning - where he witnessed the whole thing. Upon hearing about the disappearance of her boyfriend, Audrey grieves in guilt, but eventually admits to Seymour that she isn't sad. In fact, she's quite relieved. Seymour's feelings are mutual and he is happy that Audrey no longer needs to suffer, to which they reveal their inner feelings towards each other in the song "Suddenly Seymour".

Upon returning to the shop, he runs into Mr. Mushnik who threatens to blackmail Seymour in exchange for Audrey II and leave Skid Row for about 50 years, or else be turned in to the police. Unbeknownst to Mushnik, Audrey II signals Seymour to lure Mr. Mushnik into her deathly trap, and swallows him whole.

After that rather large meal, Audrey II grew to an impressive size, but still craved blood. Not being able to handle the pressures with the press and the plant, Seymour and Audrey plan to run away together and escape Skid Row. Audrey II hears of this, and lures Audrey into the shop, attempting to eat her. Seymour then saves Audrey and realizes he made a mistake giving Audrey II his blood in the first place. Later, Seymour and Audrey get rid of the monster plant that is actually a "Mean Green Mother From Outer Space" and live happily ever after and get married.

In the 1991 Children's TV show "Little Shop", Seymour appears as the protagonist but re-designed, as a 13-year old instead of a young adult in his late 20s/early 30s, and wears a red cap. He still wears glasses and has a nerdy demeanor. Instead of Audrey II as his nemesis, Orin is renamed as Paine Driller, and takes on the role of the antagonist.

Seymour is first shown in the pilot episode, Bad Seed. He still was in love with Audrey, but Audrey didn't like him romantically. He discovers a plant and he names the plant Audrey Junior. Trying to show Audrey the plant in hopes of gaining her affection, she is return disgusted and dismisses him. After this, he realizes that Junior eats meat. Junior orders a triple-pepperoni pizza with anchovies. However, Seymour doesn't have any money to pay for it, and is in debt for most of the episode for the pizza, resulting in Mr. Mushnik being angry at Seymour and blaming him for the pizza. Junior helps Seymour by bringing the flowers in the shop back to life, and the shop made enough money to pay for the pizza.

The Script describes Seymour as follows:

"Mid-twenties and perhaps balding a little. Our insecure, naive, put-upon, florist's clerk hero. Above all, he's a sweet and well-meaning little man. He is not a silly, prat-falling nerd, and therefore should not be played as the hero of a Jerry Lewis film."[1] 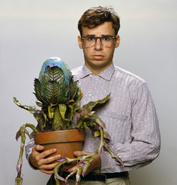 Seymour with Audrey during Suddenly Seymour